Floating serenely in the sky, the Moon presents an enticing target for photographers on Earth. We’ve all seen moonlit moments that take our breath away and make us wish we could capture them forever. Try these tips and techniques to make the most of your next lunar photo opportunity.

Getting great Moon photos takes practice. Always start by experimenting with the equipment that you already have. You’ll need to develop a good feel for the settings that work best, which will vary based on factors related to both your camera and the type of image you’re trying to capture. “Try and try again” is the key to great Moon photography. You might take hundreds of images before your Moon pictures start to look good to you, but don’t be discouraged ― the effort is worth the work.

Take plenty of digital images ― you can easily delete the ones that don’t work out. An important concept in all astrophotography is “lucky imaging,” which boils down to taking lots of photos so that you get at least a few in which the atmosphere was unusually steady, the camera didn’t shake, and the focus was perfect. You can also edit your photos afterwards. Even professional photographers use software to clean up and improve their Moon pictures.

Find something to stabilize your phone. If you don’t have a tripod, prop your phone up on something steady. Composition matters when you’re setting up your shot. Look for foreground objects to frame the Moon, give context, or add to the design of your image.

Turn off the flash, and focus your camera on the Moon instead of the sky, usually by touching it on your screen. To avoid a blown-out, fuzzy, white image, lower the brightness. You want the Moon to look gray rather than white. If you can see some lunar features on your screen, even better.

Use a photo timer if your phone has one to help you avoid touching and jostling the phone when you snap the picture. 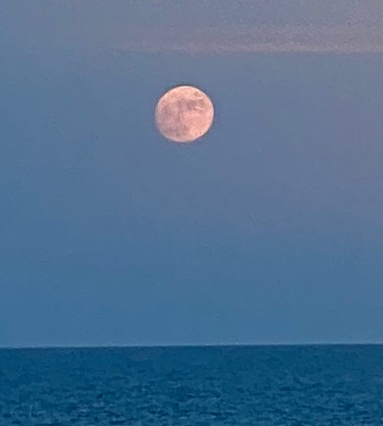 You may want to try taking your photos during a time when the Moon is not too much brighter than the sky, like twilight or dawn, so that your phone’s camera will have less contrast to deal with. Or you can try taking a picture as the Moon rises over the horizon, when it tends to appear larger.

Zoom may or may not be helpful, depending on your phone. Some phones have a genuine optical zoom, but others have digital zoom and just perform a crop ― which you could do yourself after you take your picture. Experiment with your zoom to determine whether or not it will help with your Moon picture. If your phone allows you to change settings such as ISO (sensitivity to light) and aperture (the size of the opening that lets in light), try setting the ISO low and the aperture wide. If possible, you can also play with the shutter speed to ensure that the Moon is exposed correctly. Start with a faster shutter speed and adjust downward.

If you have access to a telescope, you can point your phone into the eyepiece. With the right positioning, you can obtain a crisp, clear Moon image.

A camera will give you many more options than a phone. You’ll have more settings to experiment with, and more ways to compose your shot since the camera can easily capture details of both the sky and ground. If you have a DSLR camera, use that, but if you don’t you can take a good Moon picture with the equipment you have on hand. If possible, take your images in raw mode to give you the best options for editing your images later.

First, decide on a goal for your photographs. Do you want to show the Moon framed by trees, or the way the Moon’s phases change throughout the month, or to capture the orange color of the Moon as it hovers just above the horizon? 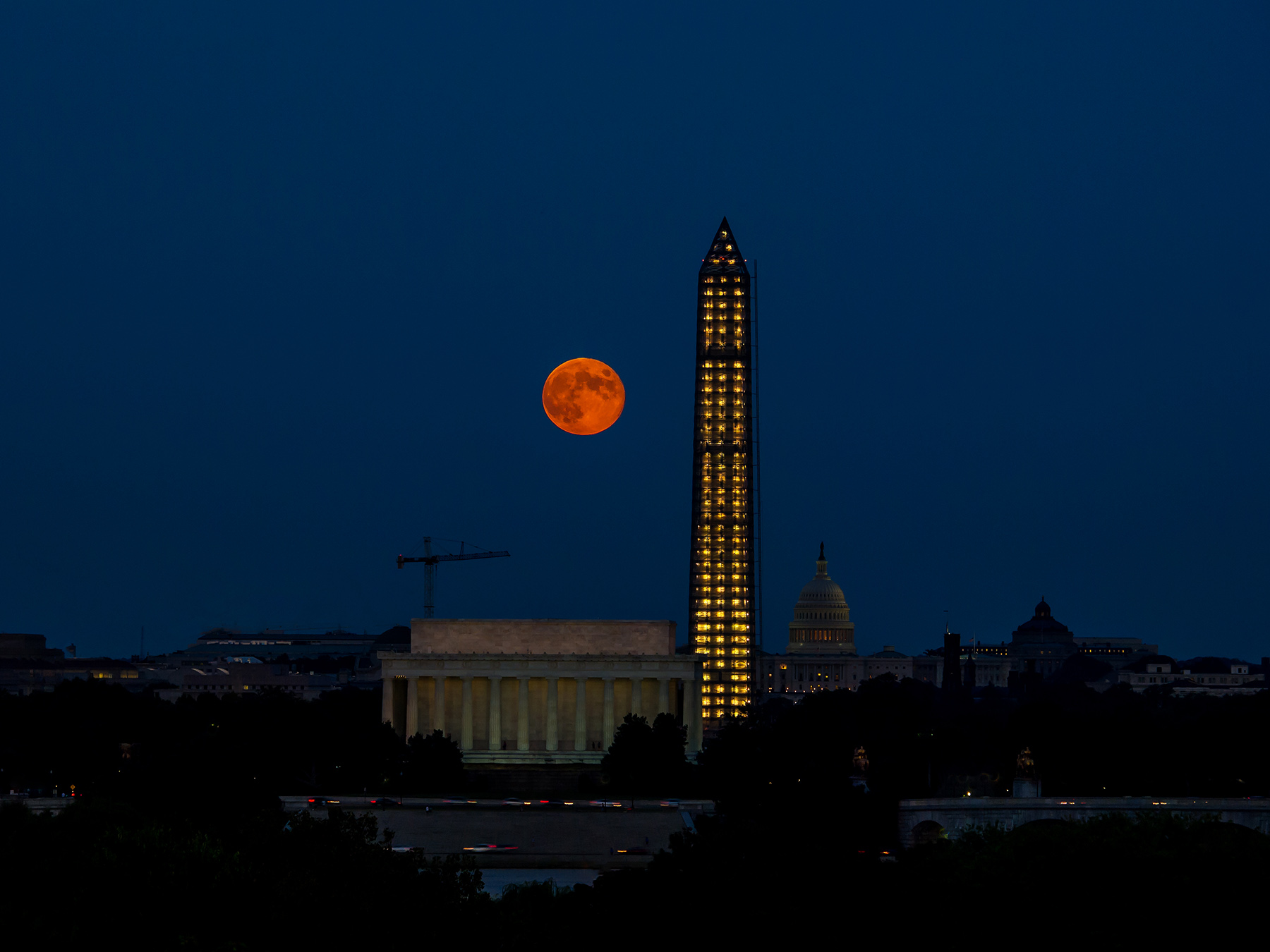 The Moon through camera lens

Now it’s time to start experimenting with your camera, so put it in manual mode. Don’t be afraid to change the settings ― that’s why they’re there! The three you’ll need to concern yourself with are aperture (f-stop), exposure time (shutter speed), and ISO.

Aperture (f-stop) is the size of the shutter opening that allows light into the camera. Lower numbers like f/2 indicate larger openings than higher numbers, like f/12. Exposure time (shutter speed) is how long light is allowed to enter the camera. ISO controls the camera’s light sensitivity. Think of it as a volume control that can raise or lower sensitivity.

There are various tradeoffs between these three settings. While a larger aperture (lower f-number) lets in more light, it also narrows the depth of field, sometimes making it harder to get the Moon in focus. And it makes nearby elements of the composition (trees, for example) more out of focus, a possibly desirable effect called bokeh. A longer exposure lets in more light, but also makes it more likely that camera motion or an unsteady atmosphere will blur the image. And a higher ISO increases both the camera’s sensitivity and the amount of electronic noise in the image. A higher ISO could make your image brighter, but it will also become grainier. The trick is to find the right balance between the effects you want and the ones you don’t.

Keep in mind that learning how to take a Moon photo is a matter of trial and error. Just as there’s no perfect formula you can follow to paint a picture, there’s no set of instructions that will automatically result in a great Moon image. The variables include your camera, the conditions in the sky, what kind of image you’re trying to capture, and how much you practice.

Take your picture, and check how it turned out. Now you can start playing with the settings to get better results. The Moon images below were taken at a variety of different settings; note how dramatically they vary.

When you take a picture of the Moon through a telescope, your options expand. You can capture the Moon’s features ― from mountains to craters. Your composition here is the Moon itself, untethered from earthbound structures but accompanied by bright stars and even planets, if they’re near.

You may be able to capture a lunar image by simply pointing your phone or camera into a telescope eyepiece... This takes practice and a bit of luck. Unless the telescope has a motorized mount that allows it to follow the sky, you’ll have to be ready quickly. With a high-powered eyepiece, the Moon can move out of view in as little as 30 seconds. Some people with steady hands can get a good shot just by holding the phone or camera up to the eyepiece, but don’t be surprised if it’s difficult to aim straight down the center of the barrel. You can also purchase an adapter that will hold the phone or lightweight camera in position for you. 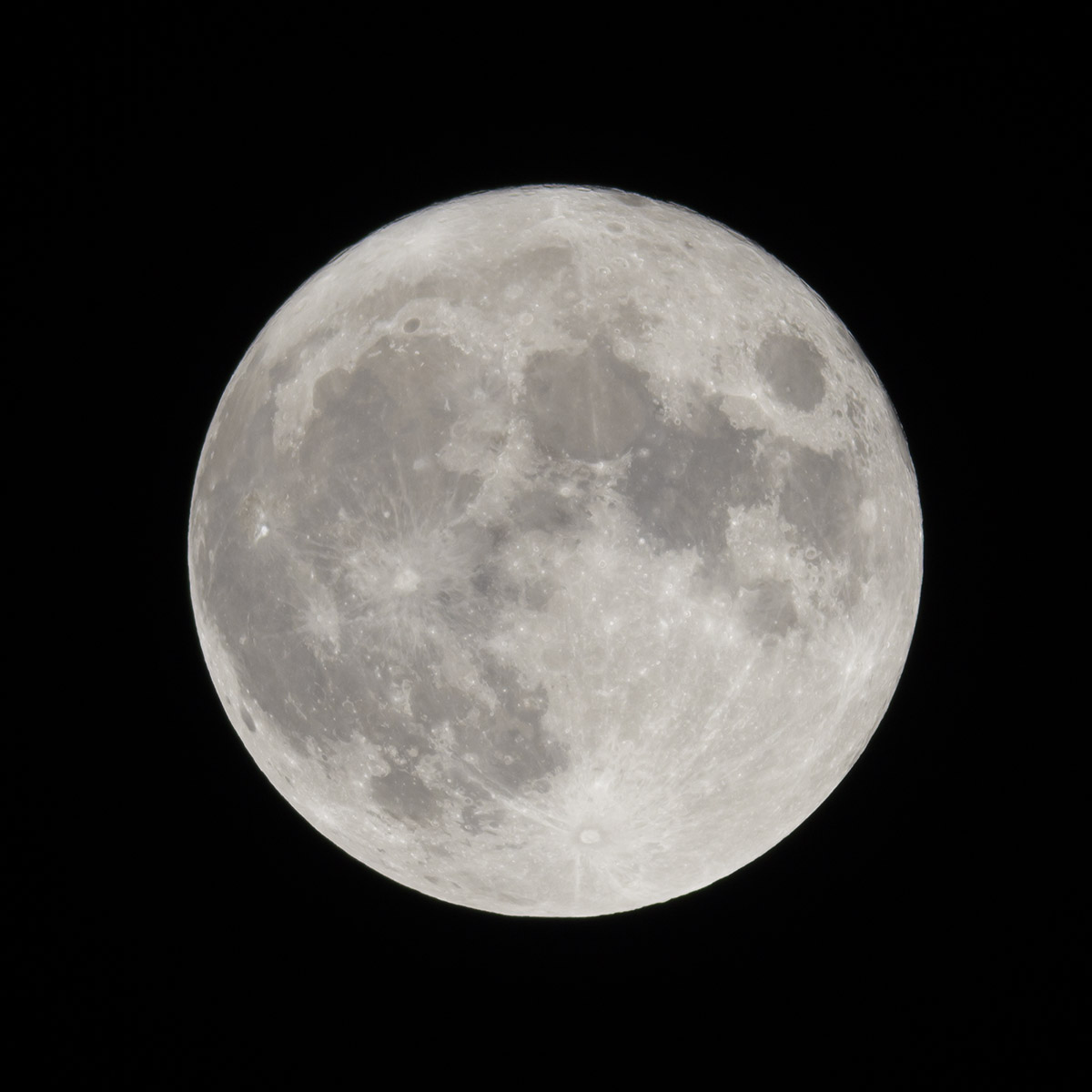 Photography through a telescope

With a little more equipment, you can try prime focus photography, in which a DSLR camera body attaches directly to the telescope tube and uses it as the lens. You’ll need both a T-ring (which fits onto the camera where the lens is normally attached) and a prime focus T-adapter (which fits into the end of the telescope tube and uses the T-ring to attach the camera). The T-ring is specific to your camera model, and the T-adapter is made for specific models of the telescope.

Put your camera in manual mode. Instead of using your camera to focus, you’ll use the telescope’s focus knobs. The aperture of a telescope is fixed, and it’s usually stated as part of its shorthand description. An “85mm f/7 refractor,” for example, is a telescope with a lens that’s 85mm in diameter and a focal length 7 times that, or about 600mm. The shutter speed and the ISO sensitivity are the two settings that the camera can control.

If your camera has a live view mode, that will make focusing and composition easier and will keep the mirror mechanism inside your camera from moving the camera slightly when you take your picture. You’ll want to either engage live mode or use your “mirror lock” option, if available, to avoid that internal vibration. You can also connect your camera to a laptop using a USB cable and software provided by the camera manufacturer. The larger laptop screen makes focusing even easier, and the laptop can be used like a remote shutter release.

Since you can see what the camera’s sensor is recording, a live view also makes it easier to adjust the exposure and ISO settings. These settings depend a great deal on the telescope, so you’ll need to experiment, but in general, you’ll want to favor a faster shutter speed because the telescope’s narrow field of view will magnify the effects of telescope vibrations, atmospheric turbulence, and the motion of the Moon through the field. An important drawback of live view, however, is that prolonged use can heat up the sensor, adding electronic noise to your images.