Anywhere from four to seven times a year, our Earth, Moon and Sun line up just right to create the cosmic-scale shadow show known as an eclipse. The Moon's orbit around Earth is tilted relative to Earth's orbit around the Sun. This tilt is the reason why we have occasional eclipses instead of eclipses every month.

There are two types of eclipses: lunar and solar. During a lunar eclipse, Earth’s shadow obscures the Moon. During a solar eclipse, the Moon blocks the Sun from view.

Lunar eclipses occur at the full moon phase. When Earth is positioned precisely between the Moon and Sun, Earth’s shadow falls upon the surface of the Moon, dimming it and sometimes turning the lunar surface a striking red over the course of a few hours. Each lunar eclipse is visible from half of Earth.

There are three different types of lunar eclipses:

During a solar eclipse, the Moon's shadow on Earth’s surface is only about 300 miles (480 km) wide. The shadow consists of two parts, the umbra, where the Sun is completely blocked, and the penumbra, where the Sun is partially obscured. People in the umbra will see a total eclipse, while people in the penumbra will see a partial eclipse. Though the shadow is narrow and the total eclipse lasts for only minutes, our planet rotates fast enough to bring the shadow a third of the way around Earth's surface before the Moon moves out of alignment with the Sun.

That we often get such impressive solar eclipses on Earth is a lucky chance of nature. The Sun is vastly larger than the Moon ― it’s diameter is about 400 times the Moon’s. But the Moon is roughly 400 times closer to Earth. This makes it possible for the Moon to almost perfectly block out the Sun when everything aligns. 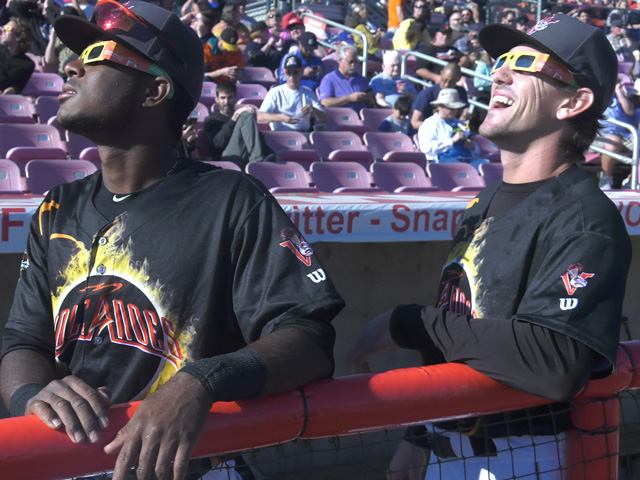 What Happens During a Solar Eclipse?

This state of affairs won’t last forever. The Moon started its existence much closer to Earth, and has been slowly drifting outward at the rate of about 1.5 inches (3.8 cm) per year. Once it makes it past 14,600 miles (23,500 km), it’ll appear too small from Earth to cover the Sun. But don’t panic if you haven’t seen an eclipse yet ― you’ve got another 600-million-plus years before that border is breached. In the meantime, you can get a preview during an annular eclipse, when the Sun, Moon and Earth align but the Moon’s orbit places it too far away from Earth to entirely block the disk of the Sun. During an annular eclipse, the sky takes on a twilight cast, but some of the Sun still shows.